Fighting Fair in Marriage: How to Fight Fair (Argue) With Your Spouse Using 10 Healthy Tips Fighting or arguing with your spouse is one of those inevitable things you will experience in marriage. And considering every marriage is unique, fighting fair in marriage has a different meaning for every couple.

For us, it’s arguing verbally and respectfully with a productive outcome.

Like most couples, we argued a lot in the early months of our marriage until we discovered how to communicate with each other without fighting.

Those early months of our marriage were very challenging and difficult. However, with effective communication, we were able to fight fair and resolved our heated arguments peacefully.

Is it even normal for married couples to fight about… nothing?

The short answer is yes.

As a married person, you will disagree with your spouse from time to time. (Which is normal) Because you are two different people with two unique personalities, thoughts, and opinions.

The tough part is learning how to disagree or fight fair with your husband or wife.

And if done in a healthy way, fighting fair with your spouse can be one of the best things for your marriage. Which means disagreeing or arguing in a healthy and respectful way.

When couples in a healthy marriage argue this way, they are able to resolve their issues, make peace, and improve their relationship. Instead of giving each other the silent treatment, fighting over the same issues, and blaming each other over and over again.

Why do married couples fight?

Well, there are a lot of different reasons. And even triggers that cause couples to fight all the time.

Some of the reasons and triggers are:

» Fighting about who does the chores, the laundry, where the shoes go, cleaning the dishes, replacing the toilet paper, etc.

» Arguing about the kids, which parenting method is the best, how to discipline the kids etc.

» Difficulty connecting with each other or having personal time for yourself.

» Career: working late hours at the office, or working for a majority of the time while at home.

, not clearly understanding each other’s statements.

Not knowing how to communicate effectively with your spouse.

» Entertainment: which  TV shows to watch, how often, and who watches what show at a specific time. What game to play for date night, etc.

» Finances: who pays the bills, the large amounts of debt or loans to be paid, how should we spend our money?

Do we even need to budget every month?

» One spouse feeling deprived of sex, which leads to resentment, anger, and frustrations.

» The in-laws: One spouse thinking less of their in-laws and highly of their own parents.

» Not being on the same page on family and marriage goals.

» Minor and unimportant stuff like folding clothes or washing dishes in a certain way.

This list could go on and on, and on.

How often does a healthy couple fight with each other?

There isn’t an exact number. However, we’ve learned that the better we are able to communicate and listen to each other with empathy, the lesser number it is. Which means more peace at home and for your marriage.

If you are constantly fighting or arguing with your spouse all the time, that’s not a good thing.

It means there is something at the root that you and your spouse have not resolved. Which could lead to an unhealthy, unhappy, and unfulfilling marriage.

Or, even worse…. divorce.

[How strong is your marriage? Take the quiz.]

How to fight fair in marriage

There are various healthy ways that you can use to fight fair in your marriage.

Below, you will find some of the healthy ways we have used to fight fair or argue in our marriage. Each way has helped us to vastly reduce unnecessary and pointless arguments in our marriage.

As a result, we’ve found a way to argue calmly, respectfully, and work to solve the issues together. And when things start to get heated, we have the right tools in our toolbox to get the train back on the rails before we make a big mistake.

Memorize and apply them each time you have an argument with your spouse. You will notice how it will positively impact your marriage.

10 Healthy tips to help you fight fair with your spouse

And be responsible while arguing or disagreeing.

Do your best to respect your spouse’s thoughts and opinions. Put yourself in their shoes by listening empathetically.

2. Do not laugh, speak condescendingly, or blow off your partner’s emotions when they are telling you that this situation is important to them.

Just doing this will help your spouse feel respected and safe with you.

3. Do not insult or result to name-calling.

It’s one of the worst things you should never do in your marriage.

4. Ask yourself, have we fought or argued about this before?

If you have, it is time to really resolve the root of the issue you are fighting about.

5. Learn to compromise and forgive each other after the argument.

Resolving the issue as a team, is always the goal.

6. Don’t raise your voice or yell.

Ironically, we raise our voices so we will be heard.

But if your spouse or both of you are yelling, no one is being heard. Your communication will not be effective.

7. Think before you speak.

Try to explain it another way. Take a break if necessary.

You are on the same team, and it’s okay to agree to disagree.

And when you do, it should be someone you both feel comfortable talking to who are unbiased, like a licensed marriage therapist.

9. Try to limit how long you argue or fight, so you don’t do it all day long.

Again, take a break if necessary. Sometimes, you just need alone time to cool off and think about why you are arguing.

If you don’t put on the breaks to an argument, you and your spouse will end up fighting so much so that you forget you are on the same team.

10. If you have kids, they are watching, listening, and learning.

When married couples fight at home, they forget who is watching and listening.

Be careful about what you do or say. You are teaching your kids what to expect in marriage from their future spouse. Treat your spouse how you want your child to be treated by their partner in the future. Show them how to problem solve respectfully and in love.

Fighting fair in marriage is something you should embrace

When I think of fighting fair in marriage, I’m brought back to how my parents fought growing up. And the many other couples I was exposed to who fought with each other.

There was plenty of screaming, name-calling, things being thrown, and physical abuse. As a result of this experience, I thought this was how couples fought or argued with each other.

It became one of my marriage expectations.

After I got married to Marcus, I thought that when we disagreed on something, the name-calling and insults were normal. Marcus never, not once, let his temper (he has one it just rarely comes out) get the best of him to the point of him calling me a name or belittling me.

He would sometimes say, “I need you to stop talking to me and leave me alone before I say something we will both regret.”

That statement alone taught me so much!

Wait, we don’t have to do anything like name-calling, etc.? We won’t hurt each other, and have to apologize for things we didn’t mean later?

It was a paradigm shift for me, and immensely increased my respect for Marcus. I was the hot-tempered fly off the handle type in the first few months of our marriage. But I’ve now learned how to take a deep breath, and not just react, but to think it through first.

Just like any married couple, we have disagreements from time to time. Sometimes we have to just agree to disagree on certain topics or give each other time and some space. Then revisit later once we both have had time to let our emotions die down and think. – Ashley

Sometimes you will fight or argue just to vent, or release anger

This means you have to listen and watch carefully when you believe an argument or fight is about to happen with your spouse.

With all the issues married couples face on a daily basis, fighting in marriage can easily become the norm for some couples.

But that shouldn’t be the case.

It should rather be fighting fairly or arguing in healthy ways for the ultimate good of each other, which in return helps you stop fighting with your spouse.

Is fighting or arguing with your spouse seem to be all you do in your marriage?

If yes, we believe it’s best to sit down with your spouse to figure out what the root cause of these fights. It could simply be the result of poor or no communication between the two of you.

In that case, learning how to communicate effectively with each other would be an amazing starting point. If not, seek marriage counseling or coaching from someone you trust.

Also, read marriage books and apply what you learn to your marriage.

You and your spouse are on the same team. It is the reason why you are married or decided to spend the rest of your lives together.

You work together in everything you do. So learn to fight fair and argue in a healthy way with your spouse.

What does fighting fair in marriage mean to you? Does it always end on a happy note?

Share some of the healthy ways that married couples can use to fight fair or argue in their marriage?

101 Fun Things for Couples to Do Together

20 Marriage Lessons We Learned From Our First Year of Marriage

P.S. Want to communicate with your spouse without fighting? Read this book today. 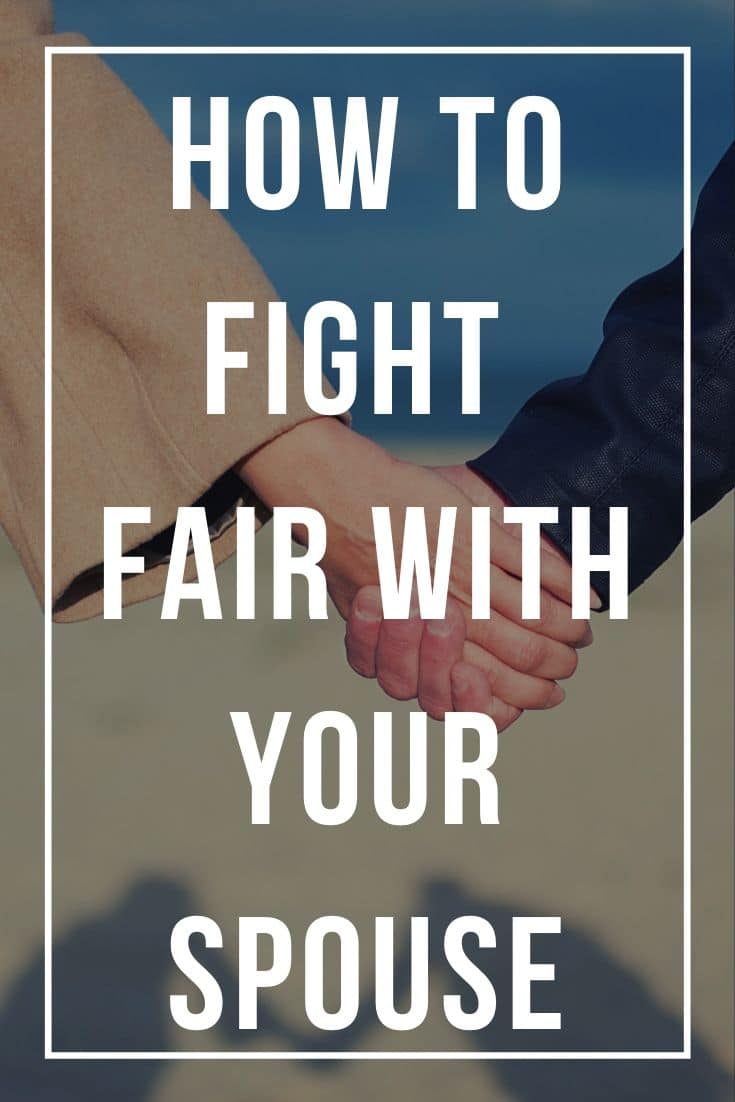