Our Best Marriage Lesson From the First Year

Like many couples, little did we know we would learn so much about married life during our first year of marriage. However, there’s one lesson that has been essential in building a strong foundation for our marriage.

So today, we are going to share that vital lesson with you. In fact, it’s the best marriage lesson and by far the most important of all the 20 marriage lessons we learned during our first year.

And here’s what it means, how we learned this lesson, and why it’s important for every successful marriage.

The basis of every strong marriage foundation is being unified.

You see, where there is unity, there is a team. There is strength, progress, and hope. There is a sense of purpose and a willingness by team-members to make sacrifices for the team to thrive and succeed.

Being unified is the first and most important brick for building a strong foundation for your marriage.

And by being unified we mean seeing each other as equal members of a team, working towards the goal of having the fulfilling marriage you both desire, communicating, and being able to put aside wants for each other’s needs.

We mean being able to:

⇒ Enjoy each other’s company, have fun, and connect on a deeper level.

⇒ Sit down together and have an honest discussion about your differences, needs, and wants.

⇒ Resolve your marriage issues together as a couple, peacefully.

⇒ Have the best intentions for each other.

But you can still be a unified couple, as soon as you both say “I do”.

That being said, the examples below will show you the unique ways we each learned and applied this marriage lesson but for the same reason; unity.

The most important lesson that stood out for me during our first year was putting into action, “how to work together as one.”

We all know once you are married to your spouse you both become one, but how do you work together as one? How do you ensure your efforts are for the betterment of both you and your spouse, not against?

Looking at our different upbringings and expectations in marriage, some of the things we did in our first month being married worked against us.

Ash is a spender, and I’m a saver. Whatever money we had, she had the tendency to spend on things that were not necessarily a need. I would rather prefer to save that money for what I deemed more important.

We didn’t agree on which items were important more often than not. I could spend $50 or less on groceries buying what I thought was healthy but to her, the food I chose wasn’t healthy enough.

In other words, I was buying the cheapest food in order for us to save some of the little money we had, while she wanted to buy more expensive options with our health in mind.

Even though we both had good intentions when it came to simply buying food, we were effectively working against each other.

So to solve this issue, we discussed and agreed on how we spent our money (grocery budget) by considering the factors we both felt were important.

Being unified is the first and most important brick for building a strong foundation for your marriage.Click To Tweet

There were many marriage lessons I learned in our first year of marriage, the biggest being effective communication.

But the thing that really gave me a whole new perspective was always believing Marcus has the best intentions for me.

To be honest, I don’t remember which book I read that had this little insight, but it impacted our relationship in many ways. I personally believe that if more married couples understood that they are a unified team, it would impact so many marriages in a huge way.

When we first got married, probably in the first month or two, a lot of my insecurities came out. Surprisingly, I had no idea I had them, but marriage has a way of making you work through things you didn’t even know existed.

Due to these insecurities, anything Marcus said or did really hurt me emotionally. I was constantly feeling rejected by the littlest things. Later I realized I was looking for these things subconsciously to self-sabotage.

Can you imagine how stressful that was for him? Thankfully, he is a very patient human being. He also gently but firmly called me out on it.

I might sound extreme, but I guess I’ll call it the American fairy tale image (my marriage expectations) I had in my head of how things were “supposed” to be, mixed with associating my traumas from the past and experiences in an abusive home where true rejection happened on a daily basis.

It became a part of my expectations for the world and all those around me, including the man I loved. Things he did would trigger me and I would be a mess. He would have no idea why I was so emotional.

Your spouse always has the best intentions for you.Click To Tweet

Once I read this statement:

My spouse always had the best intentions for me, it was like a wave of realization spread all over me.

I was like, WHAT? My husband always has the best intentions and never purposely tries to harm me? Whoa, what have I been doing? He’s such an amazing man, he’d never given me a reason to doubt him. So, why have I?

I had to take a closer look at myself and the root of why so many things set me off.

• Who was the one that called me names and put me down my whole life?

Oh, definitely not my husband.

• Who was the one that hurt me, and consistently chose himself over me?

• Who screamed and abused me? Who abandoned me time and time again. Who proved to me they wouldn’t be there when I needed them?

So why was I taking it out on him?

After realizing I had these insecurities and deep-rooted traumas to work through, I had a conversation with Marcus to let him know what I was going through. I told him I had realized how wrong I had been to assume he’d meant to hurt me like others in my past.

I promised I would try to heal from these, but it wasn’t going to be easy, and I needed his understanding, patience, and support.

Whenever I felt hurt, (which was quite frequent in the beginning) I would stop myself and ask him, “This is what I think you mean, what do you really mean,” or “when you say this, it makes me feel like____, I know that isn’t your intention.”

As you can see, truly knowing that Marcus and I were unified as a team transformed our marriage. We were able to start working together to solve the issues we faced as newlyweds.

I had to work on ME in order for us to become WE.

It’s easy to get caught up in our own world view, bias, and the life lens we filter everything through based on how we perceive events around us due to our past experiences.

However, we need to be open-minded and willing to form a new outlook, especially when we get married and merge our life with our spouse. Because in order to become unified, we must be open and vulnerable enough to look inward.

Working on YOU makes becoming WE is easier..Click To Tweet

Marriage lessons come in different shapes and sizes but learning from them is what will take your relationship to the next level.

Our first year was all about being learning to be unified, working through the insecurities, improving our communication, and believing the best in each other.

So work in unity because it’s the best way to build a strong foundation for the happy and fulfilling marriage you both desire.

“Many marriages would be better if the husband and wife clearly understood that they’re on the same side.”

What is the most important marriage lesson you learned during your first year of marriage?

Our Marriage Advice for Newlyweds

7 Simple Communication Exercises for Couples to Do Together

How to Change Your Last Name After Marriage

How to Talk to Your Spouse About Money (Without Fighting)

Get our 7 Proven and Simple Communication Steps

Join our community and get FREE access to the 7 Proven and Simple Steps we use to communicate without fighting today! 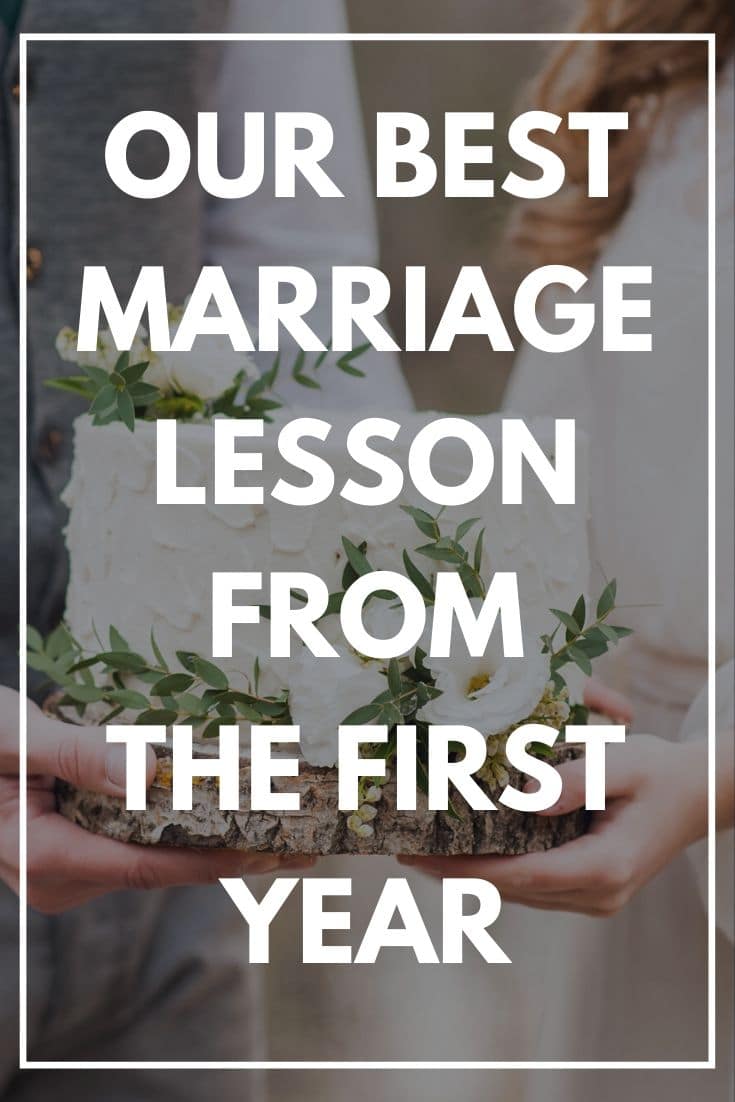